October 2020 Hero of the Month 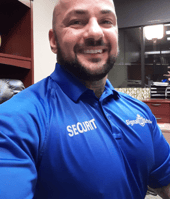 Around 10 pm on a quiet Wednesday evening, Saeed was in the office monitoring the CCTV surveillance system at a condominium property. He watched a car pull up beside the front window of the office and come to an abrupt stop. Suddenly, a man ran up to the vehicle’s passenger door, frantically yanking on the door handle and banging on the window. Saeed sprang into action, running out of the office to investigate. Upon seeing Officer Sheikh, the man ran off, full sprint, in the middle of the condominium driveway towards a busy street.

Officer Sheikh went to the driver’s window and recognized the driver, a resident of the condo. He asked the driver what was going on and she recounted that the man chased her while she drove onto the property and was trying to force his way inside of her car while she was driving. She drove up to the office so that Signal 88 could assist.

Saeed told her to stay in the car and lock the doors, and then called 911. While speaking to the emergency dispatcher, Saeed observed the man running at full speed up and down the front driveway of the property. He would run up and down, stop, then repeat himself. He appeared to be speaking to himself.

Another resident began walking his dog down the sidewalk, unaware of what was going on. The subject stopped, turned around, looked at the resident, then began running at him. Officer Sheikh got in the way to protect the resident and gave the attacker a direct order to stop. The man stopped, ran back in the opposite direction towards the city street, then stopped and stood still.

Back in the car, the first resident began driving her vehicle down the front driveway to leave the property. The subject again ran toward the car. He evaded Saeed at first and began yanking the door handle again, yelling “Let me in!” Saeed ran up to the man and gave him a very stern and loud order to get off the car, but he continued trying to force his way into the vehicle. Officer Sheikh inched ever closer to the subject while repeating his orders to get off of the car, still communicating with emergency dispatch.

Again the attacker halted, then ran full speed in the opposite direction around to the rear of the building. Officer Sheikh followed at a safe distance while informing emergency dispatch of the subject's location and behavior. The man began running up and down the driveway between the condominium and a neighboring high-rise complex.

On a return leg of his back-and-forth running, he locked onto Saeed, who was still speaking to emergency dispatch. He sprinted straight towards Officer Sheikh, growling. Officer Sheikh dropped his phone, stepped back, took a support stance, and yelled at him to "get back now!!" The subject stopped, then ran out of the property onto the city street. Just then, a marked police cruiser arrived on the scene.

As the police officer ordered the man to stop, he ran to a vehicle which was slowly passing by and attempted to open the passenger side car door and jump in. The vehicle sped off. The policeman established contact and began attempting to handcuff the subject. The subject struggled and the situation turned into a wrestling match. Officer Sheikh asked the officer if he needed help; he did, so Saeed helped restrain the attacker’s arms until other police officers arrived and took control of the scene.

After the subject was safely in custody, Officer Sheikh helped officers identify and interview the driver and dog-walker as witnesses. This was only possible because Saeed has invested lots of time to build positive relationships with the property’s residents, and because of his attentiveness and professionalism as a security officer.

This entire story comes from Saeed’s report of the evening’s events, filed digitally via Signal 88’s digital reporting platform, 88Edge. It has been only lightly edited for clarity, which is a testament to his thorough and diligent approach to his work even after a heated encounter like this one.

As always, we wish such heroics were unnecessary, but we are proud that Saeed was there to provide peace of mind when it was needed most, and without causing injury to any person. Saeed’s supervisor notes that he is a high-caliber guy, and an integral part of the team with tremendous potential and a very bright future ahead.