Imagine if a museum security guard had prevented Max from lighting the candle in Hocus Pocus and resurrecting the Sanderson sisters. Or a roving patrol had seen Georgie out in the rain and taken him home instead of Pennywise dragging him into the sewer in It. Or the Overlook Hotel had a security system instead of a caretaker in The Shining…

Let’s face it, some of our favorite scary movies would be pretty lame if people either a) followed the rules or b) had better security. Since we can’t control the former, here are 13 Halloween movies that would absolutely be ruined if there had been effective private security in place.

(Be Warned: Spoilers Ahead!)

OK, even a highly trained security guard probably wouldn’t be able to stand up to the demonic entity that is Pennywise the Dancing Clown from It. We get that. But the inciting incident that sets the whole chain of events in motion for the Losers Club to get involved rests on little Georgie, in his bright yellow slicker, innocently chasing his paper boat down the rain-flooded gutter until it disappears into the storm drain. Enter Pennywise, the creepy clown, sweet-talking the kid into joining him until Georgie reaches down for his boat… and a mobile security patrol sees the kid, asks him what he’s doing, and offers to take him home — an offer Georgie quickly accepts, because a professional, uniformed officer (in a warm, dry vehicle) is a much better bet than a questionable clown who lives in a sewer.

The whole reason the Sanderson Sisters run “amok, amok, amok” in Hocus Pocus was all thanks to Max Dennison lighting the cursed Black Flame Candle, conveniently just gathering dust at the Sanderson home in Salem, Mass., now a museum, on All Hallows Eve. So, a known witch museum at the site of the most well-known witch trials in the U.S. doesn’t have a security system in place? Or even one security guard watching over it on the spookiest night of the year? (Thackery Binx, the boy-turned-cat who tries to prevent the witches’ resurrection, doesn’t really count!)

School security must be really lax at Carrie White’s high school. How else can you explain how two high school students could break in, rig a bucket of pig’s blood over the stage, then hide under it to dump all over poor Carrie just as she’s crowned Prom Queen? Heck, even an observant teacher or chaperone would have probably noticed something was amiss and stopped the bucket drop, thus preventing Carrie from unleashing terrible revenge upon her (admittedly terrible) classmates.

Another school dance that could have benefited from better security is seen in Idle Hands. Anton Tobias’s possessed hand’s killing spree may have been preventable if the dance had a security officer to stop it from its rampage. Then again, this movie IS about a possessed, disembodied hand that survived a zap in the microwave, so who knows? Maybe a team of security officers would've been just the thing.

Most security personnel aren’t equipped to deal with ghosts, but they DO know how to spot security and safety issues. Seriously, how many times do people fall from tall surfaces in Casper because there just don’t seem to be any caution signs or railings? And how many people break into Whitstaff Manor anyway? (Maybe the owners thought Casper and his ghostly uncles were all the security system they needed. They were wrong.)

If “All work and no play make Jack a dull boy,” then why does the Overlook Hotel in The Shining actually need a winter caretaker? A dedicated security officer or mobile patrol would be able to perform the needed services to keep the hotel safe and secure without all of the drama of actually living there among the ghosts. As long as they stayed away from Room 237…

What is hotel security coming to these days? In The Witches, a gathering of the nation’s witches just books a hotel conference room for their annual convention and no one bats an eye? An event such as that would require extra security on hand, and hopefully, they would be astute enough to notice that something was off.

The premise of this little gem is like Groundhog Day meets Scream: A college sorority girl relives the same day over and over again, always ending with her demise at the hands of a masked assailant. No matter what she does to escape, the villain always finds a way to pursue her around her college campus like a hound dog on a fox. Where is campus security in each and every time loop?

In this classic, Linus, a young boy who can’t even reach the top of his mailbox, is staying outside all night. Unsupervised. At the end of October, when temps can get below freezing. He waits all night for an creature that sounds like Halloween’s answer to Santa Claus. Maybe he could have just had on-site dedicated security watch for the pumpkin for him, so he could join his friends in the much-more-reassuring activity of begging candy from strangers.

Michael Meyers might have more lives (or movies) than a cat (11, to be exact, with two more sequels in the works for 2021 and 2022), but at least a security patrol with flashing lights would have given him pause as he creeped Laurie Strode and her friends through the neighborhood in the original Halloween.

Who ya gonna call? Well, you could call the Ghostbusters, but the main problem in this movie was a downtown apartment building causing paranormal activity. It sure would have been nice to have a roving patrol or concierge security officer to help prevent any issues before things got out of hand. Or, security staff could have monitored all the captured ghosts before they were unleashed upon New York City!

Speaking of roving patrols, Santa sure could have used one of those in Christmas Town, thus preventing his abduction at the hands of Lock, Shock, and Barrel. Such security could help him all year long with loss prevention and toy factory lockups as well!

Party crashers like Brad and Janet would have been kicked out of Dr. Frank-N-Furter’s Annual Transylvanian Convention in The Rocky Horror Picture Show if only he had bothered to have a dedicated officer manning the gate and patrolling the property! Event security is important.

Are you like many of these movie characters and don’t know where to start when it comes to security? Signal 88 can help. Download our security services brochure and schedule a free, on-site security assessment. 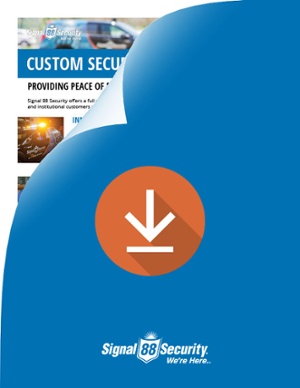